Thanks to Linda for this week’s Stream of Consciousness Prompt.

The prompt for this week’s Stream of Consciousness Saturday is “-tast-.” Find a word that contains “tast” and use it in your post. Enjoy!

What a fantastic time we are having with our family in Plettenberg Bay.  The public school holidays are over and our daughter returned to school on Tuesday but the grandchildren have an extra week as they both attend Independent Schools. On Wednesday we took the kids to their dental appointments and on Friday to have their eyes tested.  Simon is fine on both counts but Shan needs some dental work and a new prescription for her spectacles.

The optician appointment was quite early and we made it from the farm with just two minutes to spare.  Afterwards, we went to The Lookout Beach Restaurant for a tasty breakfast.   I was hoping the weather would be warmer but it was a tad chilly,  However, we still sat outdoors and enjoyed the view.   I had ‘All you ‘avo’ wanted” which included two poached eggs, bacon, tomato and smashed Avo on toast.  I just love the taste of avo and bacon together.

The kids warned us before we left that we had to be back in time for the screening of The World Cup Rugby game – The Springboks were to play Italy.   “We must be home by 12:30 – It will be a catastrophe if we miss it!” we were warned.

I assured them that we had plenty of time but didn’t realise that breakfast would take as long as it did and then we had to do a few chores in town.
Finally, all was done and the kids yelled – Go, fast Grandpa – put your foot down!   But I insisted that he take it easy on the dirt road – rather get there late than dead!
You could taste their excitement as we skidded to a halt at exactly 12:44 – the game began at 12:45 – not 12:30 but Shan wanted to have some buffer time. They were singing the national anthems as we entered the lounge.

Dad had also just arrived home as he certainly wasn’t going to miss this very important game!   And what an exciting game it was – the cheering and yelling from our small group of supporters reverberated throughout the house and there was much jubilation when the final whistle blew and the Bokke had won 49 to 3!

Lauren had gone to school dressed in green and with a Springbok scarf around her neck.  The entire school had gathered in the hall to watch the match.  She came home with a throbbing headache.  “the kids didn’t stop screaming throughout the game,” she complained.  But she was thrilled that we’d won!   Ruby is the national religion of this country!

The weather today was awesome and we had another visitor staying over.  There were also two other guests for lunch.  They were there to hunt bush pig but found an abandoned baby.  What would they do?  “We can’t kill a baby,” they said.  Instead, they took it home to raise.   What will they do when it grows up?  I have no idea!  Perhaps it will go to a sanctuary. 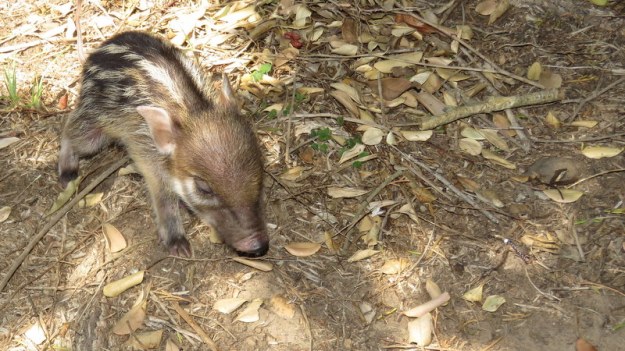 So what was for lunch?  A tasty braai of course.   It’s the national food of every red-blooded South African.   And the braai master? The inimitable Earl. 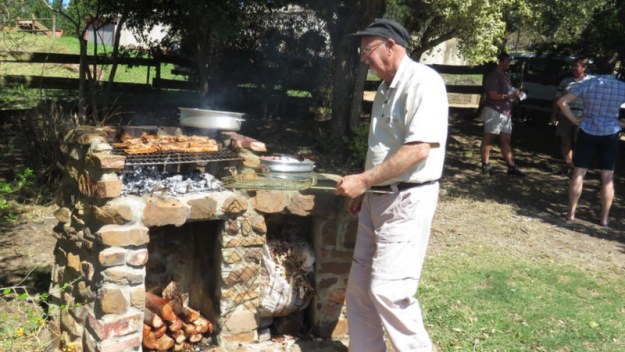