We were out all day again today. The weather was cool and overcast with temperatures between 21 and 25 degrees C.

There were long stretches of driving where we saw very little and others where we were pleased to see good herds of plains animals as well as birds and one or two predators.  We drove the H4-1, S20, S30, S128 and H4-2.

No drive is complete for me unless I see a giraffe! 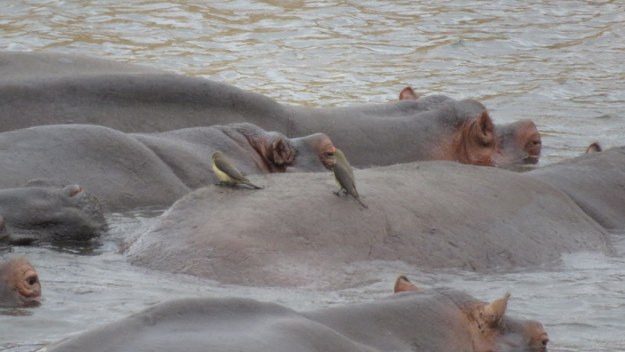 A pod of hippo being groomed by Red-billed Oxpeckers 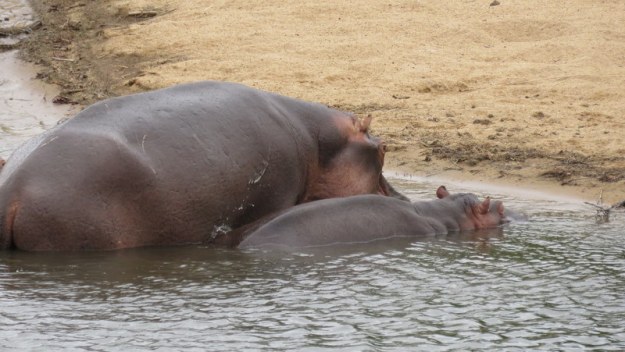 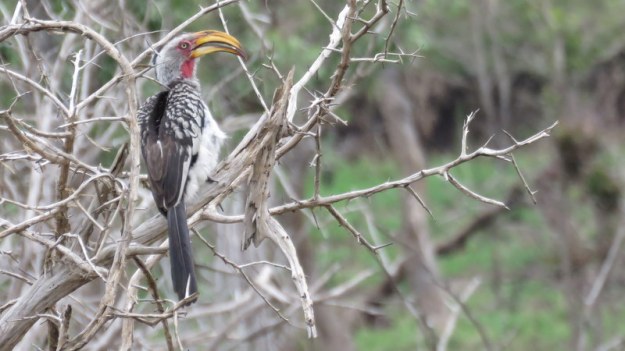 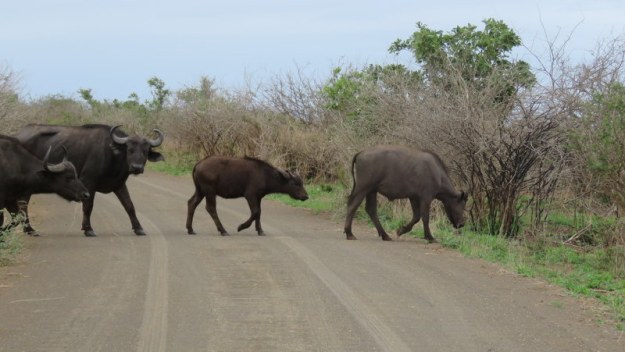 Who are these people, Mom? 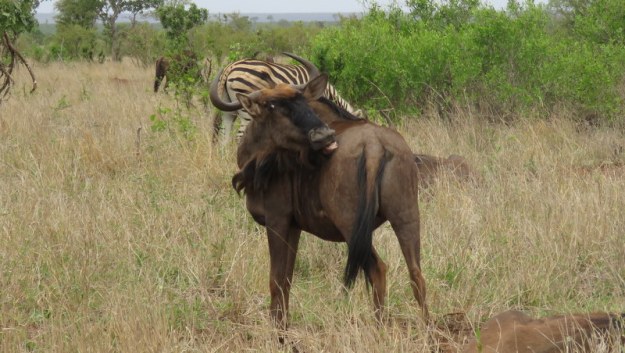 We have only seen small herds of wildebeest and they’ve usually got their backs to us!

We were driving quietly along the S128 and were looking forward to breakfast at Lower Sabi.   There were no other cars in sight until we saw one parked up ahead.  He was facing us.  I took my eyes off the bush and kept them on him wondering what he’d seen.   There was a single wildebeest to his left – our right. It was standing dead still, staring into the bush.  “Is it only the wildebeest you’re looking at or is there something else?” asked the Earl.

He explained that he and his wife had watched a lioness stalking the wildebeest but had dropped down into the long grass when the wildebeest saw her.   She was still there and we managed to spot her.

The man went on to tell us that he’d also seen a cheetah on the opposite side of the road and drove on to show us the exact spot.  We reversed no more than 150 meters and there she was!  I’d missed here when I took my eyes off the task at hand! 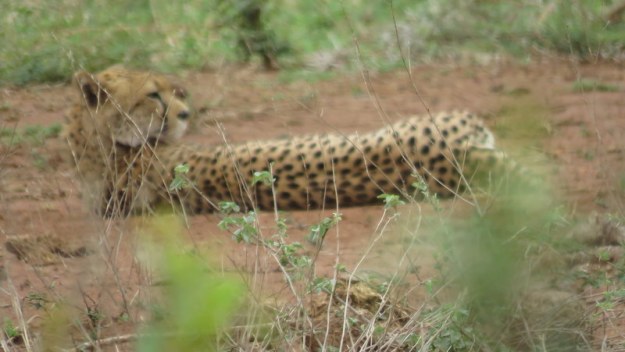 Grass in front of her face made photography blurry 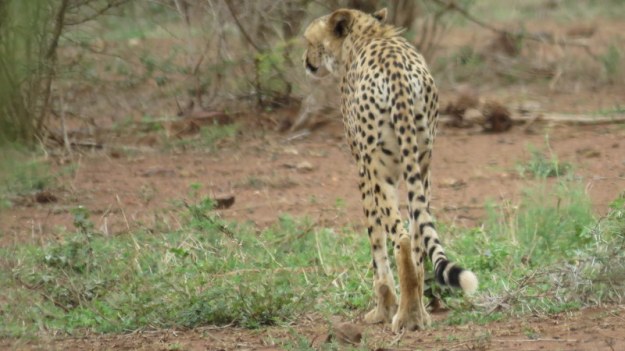 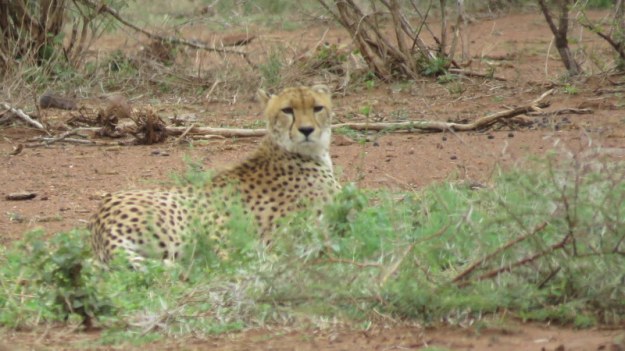 Now when we looked right, we could see the lion.  When we looked left we observed the cheetah!   This was just too much!   We remained where we were looking left and right while the other chap went back to his original spot to see if the lion would try to chase the wildebeest.

After a while, the lion stood up.

I wonder what I should do?

And off she went

This left us with just the cheetah who sat up straight as soon as she saw the lion move.

Good riddance – I don’t need competition from that lioness!

“That was awesome,” I told the Earl, “But now hurry to Lower Sabi – I need the loo!”

That was the most exciting part of the day.  At Lower Sabi I wanted to take a walk from the restaurant along the path next to the river but this chap prevented me from passing.

So we left and continued our drive.

Because of the overcast conditions, hippos were out of the water 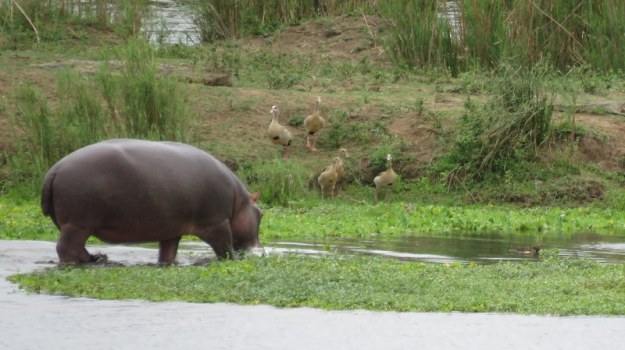 We soon came upon a traffic jam.  “What do you see,” we asked a jeep jockey as we stared into the bush.

“A leopard in that tree!”

Well really!   What was it thinking?

Surely he could find a more comfortable place to sleep!

We left the poor creature to sleep and hoped not too many tourists would disturb him. 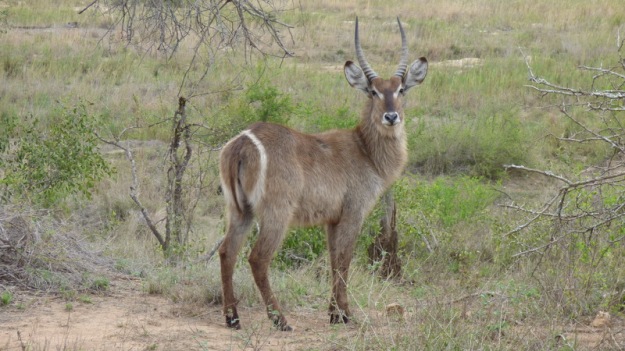 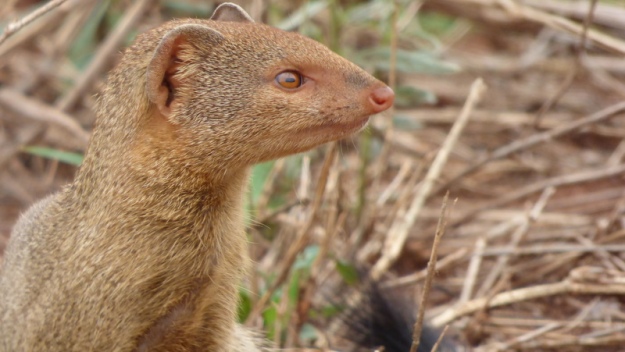 Before going back to camp we visited Lake Panic and spent an hour there.  We have had many wonderful experiences at this hide.  It was not as awesome as usual today but it was still great to be there. 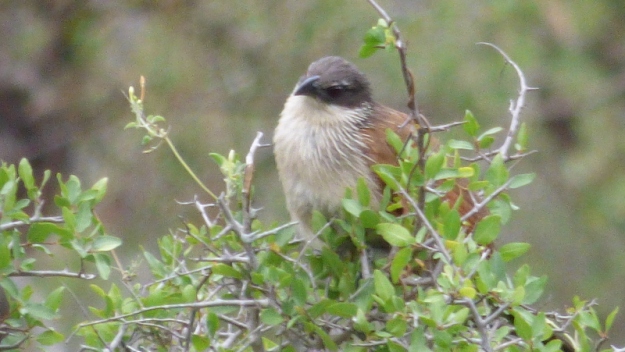 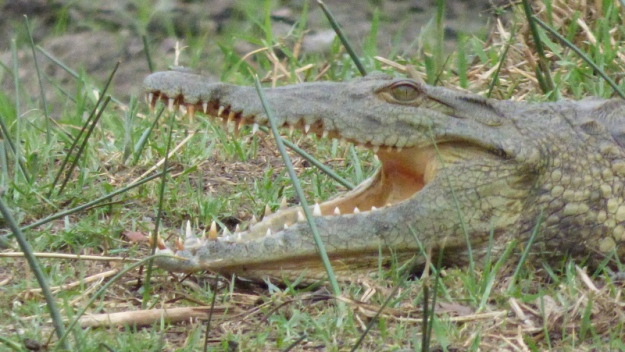 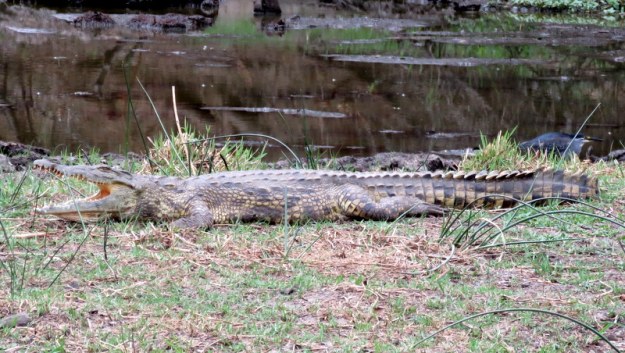 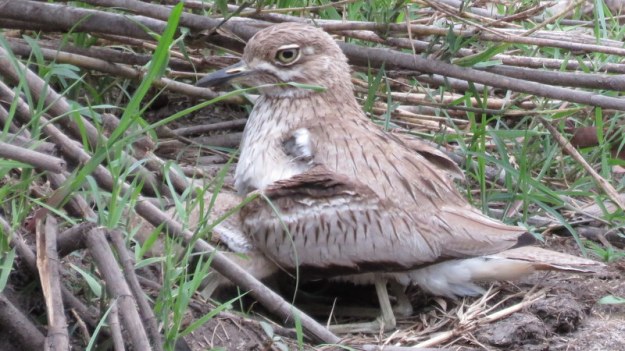 Mommy Water Thick-knee has babies under her wings

This one got restless and came out to say hello

I was reluctant to leave the hide but the Earl insisted.  We were back in camp by 4:30 pm.

We had a delicious braai of lamb chops and boerewors, sweet potato, gems, whole garlic and salad.

It rained hard during the night!  Oh no – would we have to pack up in the wet in the morning?