South Africa’s Lockdown due to Covid 19 began at 12:00 am today.  I live in Struisbaai close to Agulaha, the southern tip of Africa.   It is a small seaside village where a large number of the population are retirees.   Many of the homes are only used at weekends and during school holidays.  Schools were due to close for the holidays between 20 and 30 March but because of the current crisis, they closed on 18 March until further notice. Those who planned to spend that time at their holiday homes in our area came as usual and many are not returning until the lockdown is over!   However, there was also an exodus from Struisbaai and Agulhas.  Retirees have left to spend the duration with their families in the city.   Our youngest daughter, on the other hand, decided it would be better for her to come here so there are three of us keeping each other company during our forced house arrest.  Our street is very quiet.  Nobody is in residence on either side of us and there is also nobody in the house opposite.   In fact, very few houses in our street are occupied.

We are only allowed to leave the house if absolutely necessary – to buy food, medicine or seek medical attention.

I am keeping a close eye on the progress of the disease in our country.   The numbers of people infected have risen rapidly so that this morning there are over 1000.  Sadly two young women died this morning.  One was 45 years old and the other only 28.  The older woman was in a private hospital and the younger in a government hospital.  They were both in our province – The Western Cape.

It is incomprehensible to me how some people are not taking the situation seriously.  Two people who tested positive with Coronavirus were arrested in Johannesburg.  They broke their quarantine regulations.   Other chancers in Gauteng were fined for being on the streets for no good reason.

Alcohol and cigarettes will not be on sale during the lockdown.

It is going to be a challenge getting through the next several weeks with little or no social contact.

It is a stunning day today and we would have taken full advantage of it!  But – No walks on the beach.  No visiting the harbour.  No looking for the stingrays nor watching the fishermen bring in their catch!

Instead, just after 8, my daughter, Lollz and I flung the windows wide, laid down our mats, opened the recording of “Freedom Flow yoga with Adrienne”  which was set in front of a calm river.   We imagined we were right there with her!  We plan to do a different Adrienne routine every morning. 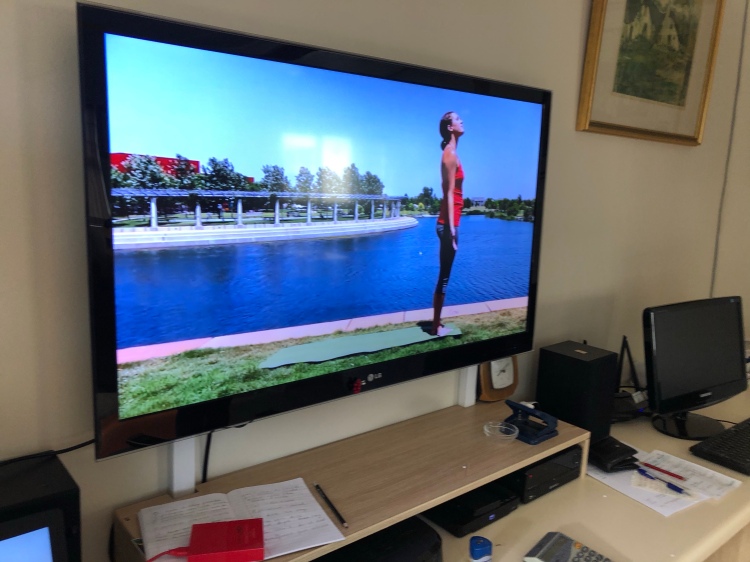 While Earlie made breakfast and Lollz got started on her workday online, I did an Italian lesson.  Then I swept and mopped the floors and cleaned the bathroom and kitchen. Lollz said the house is going to be so clean because I’m doing it every day just to stop becoming bored!  Well, the cleaner I have in from time to time is working from home – she sent me instructions about what to do!

I also did the ironing while listening to BBC Sounds Women’s Hour podcast.

Lollz and I took a walk around the garden and I saw a few chores I could set The Earl to do.   I’ve pulled some weeds and got him to transplant a few things from one place to another!

After Lollz finished her day ‘at work’ we did our cardio workout with Leslie Sansone.