Today we first went to the waterhole then had breakfast in camp.  We were out by 8:15 and had a lovely morning.

First of all our birding was most rewarding

Then we went past Gemsbok vlakte and on to Olifantsbad.

There is a picnic spot and long-drop near Olifantsbad and I wanted to have a pit stop there before going to the waterhole but The Earl wanted to check it out first.   If nothing is there he tends to resist waiting a while before leaving.  I wanted to have coffee and a snack in the car at the waterhole, giving us time to sit and wait for the creatures to arrive!

I was quite cross that he wouldn’t listen to me – – – but not for long. As soon as we came in sight of the water hole I spotted them – A whole tribe of ellies drinking.  And that’s not all – there was a variety of other game too.  It was awesome.

We spent over an hour watching and photographing.

Then we went past Gemsbokvlakte again and enjoyed another half hour watching all the plains animals drinking.

A mom and dad ostrich were standing in the sun with wings spread to shade their chicks – It was so sweet.

Today was overcast and we had a few drops of rain but the wind died down.  We made our way to Sprookwoud some way away but did not have very good sightings. The animals are clearly closer to the camp.

We stopped at a picnic site for breakfast and found dozens of thirsty sociable weavers.  We poured water into the empty bird bath and they stormed it with gusto. A bul bul tried to join them but they would have none of it.   Then a little goshawk swooped on them and they scattered in fright. Suddenly I heard a splat and couldn’t see through my right eye! I removed my glasses and found that a frightened bird had crapped on them!

Everybody thought it was very funny!

Back at camp we went to the Waterhole and saw a lovely collection of game.

We went out again in the afternoon but saw very little.

I only woke up at quarter to six this morning and hopped up to go to the showers.  Our little camp was still very quiet when  I returned although The Earl had risen and gone to the ablutions too.  I called to Pat who sleepily replied that she was awake but not dressed!   I put on the kettle and soon we were all enjoying coffee and rusks.

We decided not to go to the waterhole this morning. I thought this to be a bad move as I was sure we’d see more there than on a game drive – but I was proved wrong!  Today we had the most awesome day as my photos will demonstrate

We visited several waterholes and each one had something special to amuse us.

Of course we stopped for birds along the way.   Our national bird the blue crane and national animal, the springbok appeared in the same frame!

We also saw Norther Black korhaan for the first time this trip.  A major tick was the red breasted swallow, which The Earl spotted.

Imagine our delight when we pulled into our breakfast stop – Springfontein Waterhole and saw a honeymoon couple right out in the open.  When lions are in love they spend all day together and mate ever 10 to 15 minutes!  We spent over an hour with these two love lions while enjoying our breakfast and coffee.

While watching herds and herds of zebra and other grazers at Salvador I spotted a huge male lion making his way toward the smorgasbord.   As they became aware of his approach the animals stood to attention and only relaxed marginally when he flopped down under a shady tree.

On our way back to camp we came across cheetah!  Cheetah are not seen very often in Etosha so we were thrilled to see three on a kill.   They were behind a thorn bush so photography was tricky.

After supper we sat at the waterhole for an hour or two.  Rhino and elephant came down to drink.  No flash photography is allowed from the hide but I got one or two of the rhino before it became too dark.

I was up by five thirty this morning.  I made coffee and woke everyone at quarter to six.  By 6:15 we were all at the waterhole and spent an hour or so there.  It was awesome watching the birds and then the animals come down in turns to drink. 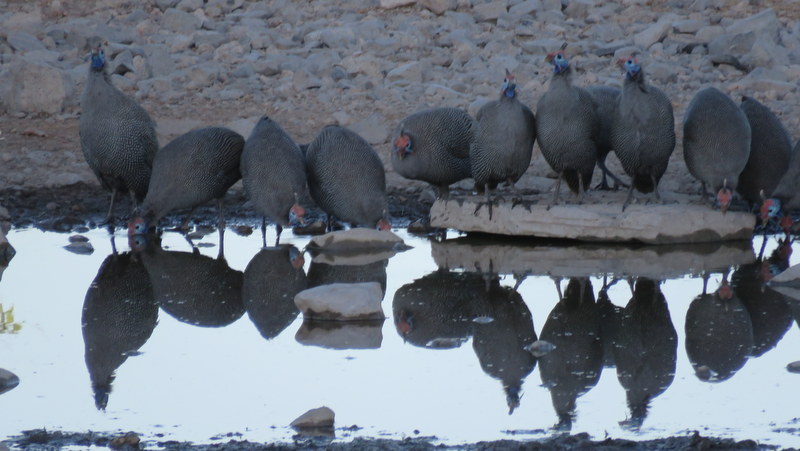 then a marabou stork flew in, landing like a Boeing  into the shallows. 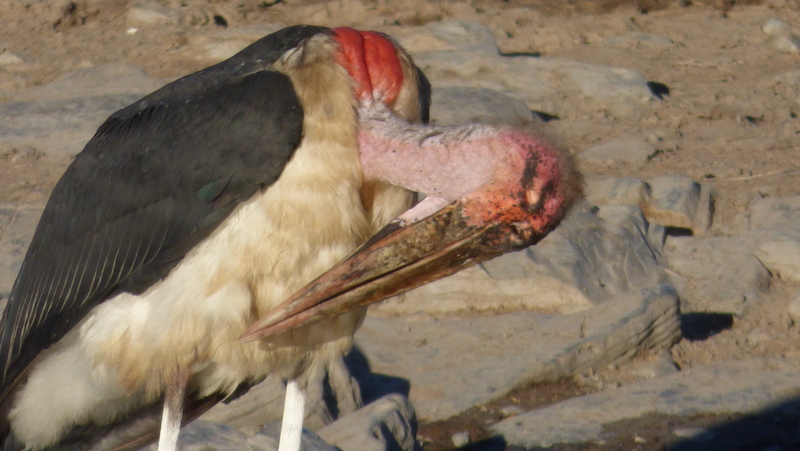 Lots of little birds were flitting about too.

The Earl cooked breakfast and then we went for a drive just after 9.

We were delighted to see herds and herds of plains animals  The zebra population is certainly in no danger of extinction in the Etosha National Park! 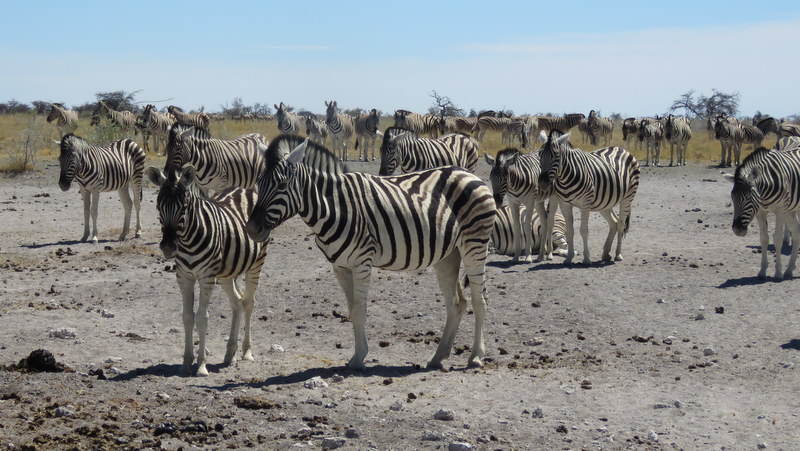 This baby tried to hid behind Mommy 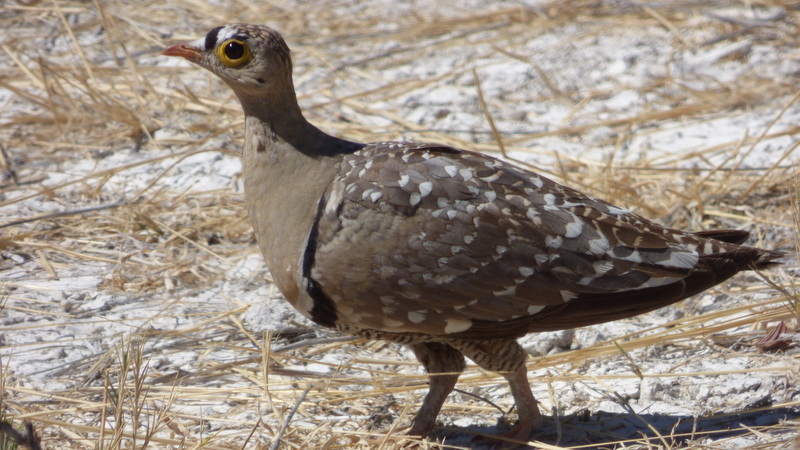 Double Banded Sand-grouse came down to drink too.

A springbok and kori bustard barely greeted each other as they passed by each other.

We came across a rhino without a horn  – removed to prevent poaching?  I don’t like that idea.

We saw these boys at a distance and then they came closer and closer.  They were on their way to a waterhole.

We made it a short day today and returned to camp at 14:30.   Pat and I did some laundry and we all had a swim in the pool.

For dinner we did chicken curry in the Remoska Pot.

After dinner we went to the waterhole. Earl decided not to come. Pat and I stayed from 8:30 to 10:30 but Tony left after he’d seen enough rhino standing perfectly still to last a lifetime!   Pat and I were determined to see elephant and two large males appeared as soon as Tony left!   The rhino made a hasty retreat at their approach and hung in the shadows until they left.

During our vigil hyenas came and went and  we counted 10 altogether.  There were also a total of 10 rhino coming and going during the evening.   Lovely to see that these endangered creatures have escaped the poachers’ guns.

We also saw a genet.

Apologies to my regular followers for not posting every day. The internet in the bush is slow and won’t even think of obliging  to upload my photographs!  My diary is up to date so I will post when I can.  There probably won’t be another until I return to Struisbaai.  Today I’m in Windhoek but then it’s The Kgalagdi  where there’s no internet at all.

The picnic sites in Etosha are not great so we usually stop at a waterhole and have brekkie in the car.  This can be tricky when it comes to pouring coffee and dishing out cereal but a chopping  board, balanced on Pat’s file which just fits over the box of field guides makes a suitable table.

When we parked off at Groot Okvevi, there was not much to see except for a few doves and starlings taking the waters.  We sat and watched for a while and then other birds appeared to entertain us. Then a dear little steenbok appeared and timidly took a drink before scampering off.

The Earl captured the reflection so beautifully

After that the action really began – we munched on cereal and boiled eggs while watching zebra. Then a family of four kudu emerged from the bushes and took turns to drink.  They became very alert and then something frightened them and they sprang out of the water and further up the bank. 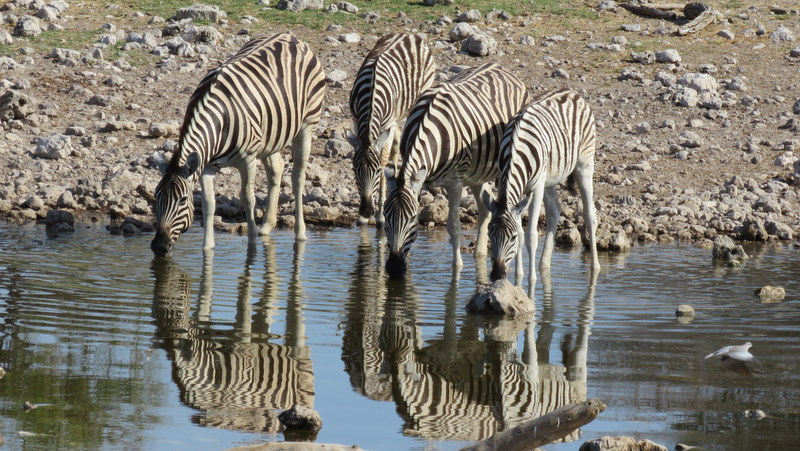 A pregnant hyena came loping down the from the thicket and plunged straight into the water.  She sat down up to her neck and the other animals could only look on and hope she’d leave soon. But she was enjoying her bath and stayed for ages.   Tony quipped – I think she’s planning a water birth! 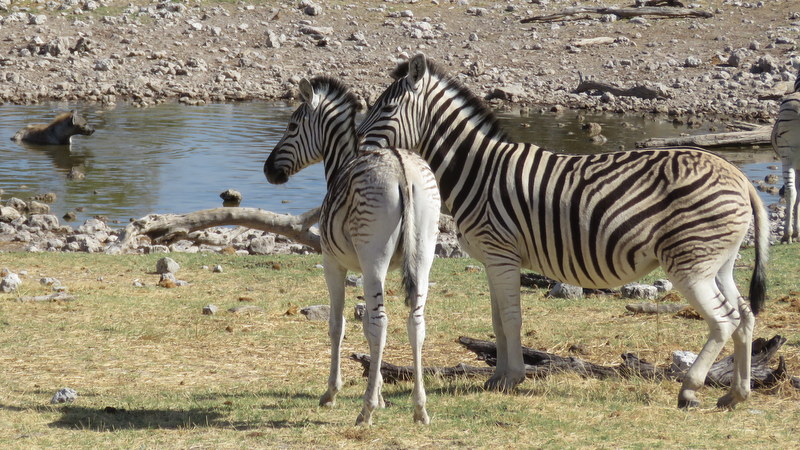 We also enjoyed watching Namaqua and Burchell sandgrouse fly in to the water’s edge take a drink and then fly off again.  This happens in waves and is fascinating to watch. 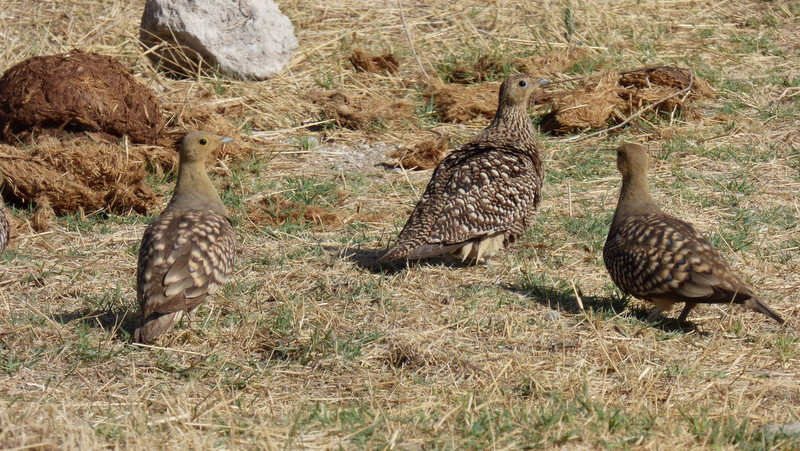 We spent about three hours just at this one waterhole.  The hyena did eventually leave the water but she plopped down under a nearby tree and had a sleep in the shade.  When we returned in the afternoon, she was back in the pond. 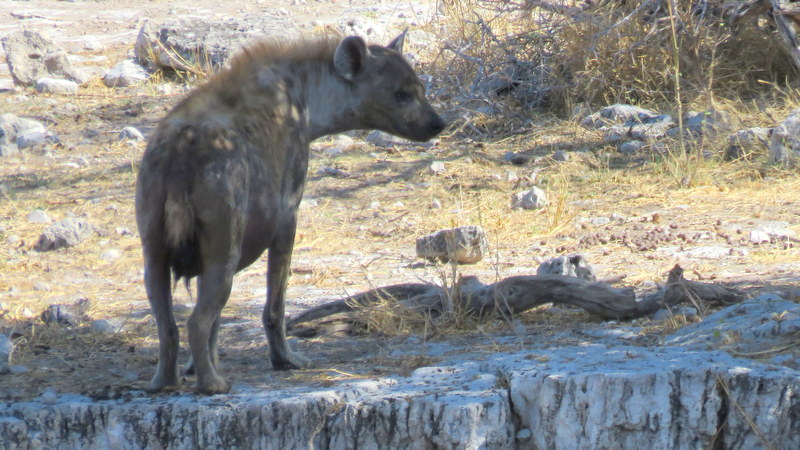 We went back to camp just before 11 and spent some time at the Camp Waterhole then rested till 2:30 when we went out again.

After stopping off to see our pregnant hyena we drove some roads and the highlights were at Tsumcar waterhole which is really popular with the in-crowd.  Not sure what the waiting list here is but it’s always busy. 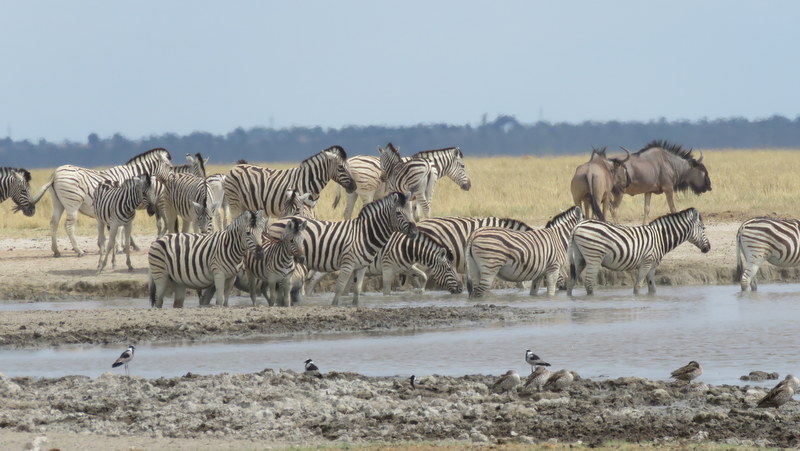 This warthog had fun rolling in the mud

We also enjoyed the shore birds 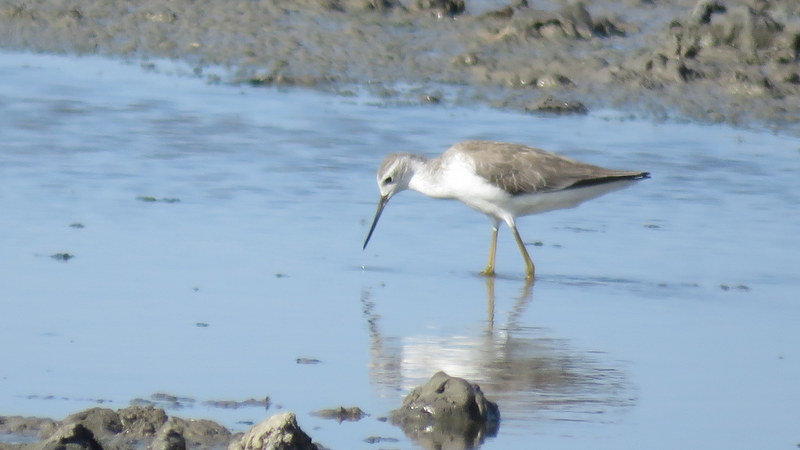 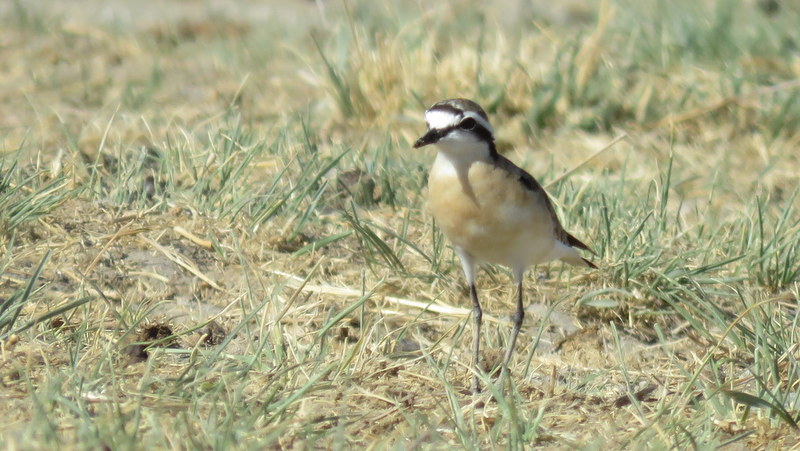 We arrived at another waterhole just in time to see the elephants come down for their evening drink and bath. 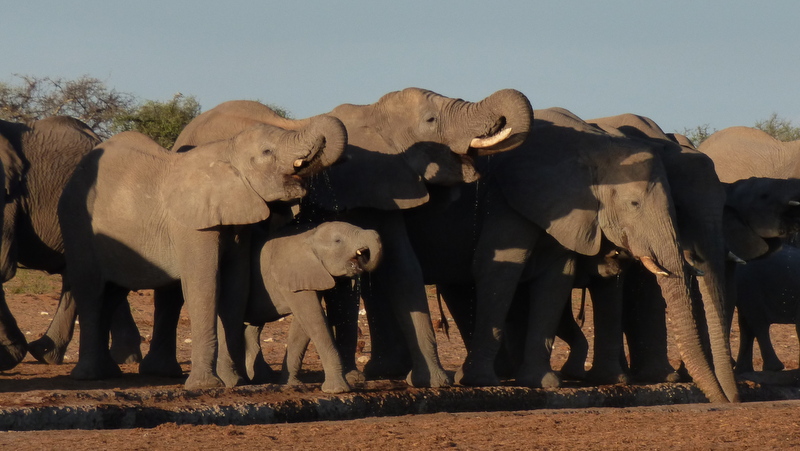 Our day ended with a delicious chicken stir fry.  Pat and I prepared the ingredients and Tony cooked it expertly on the Skottel. 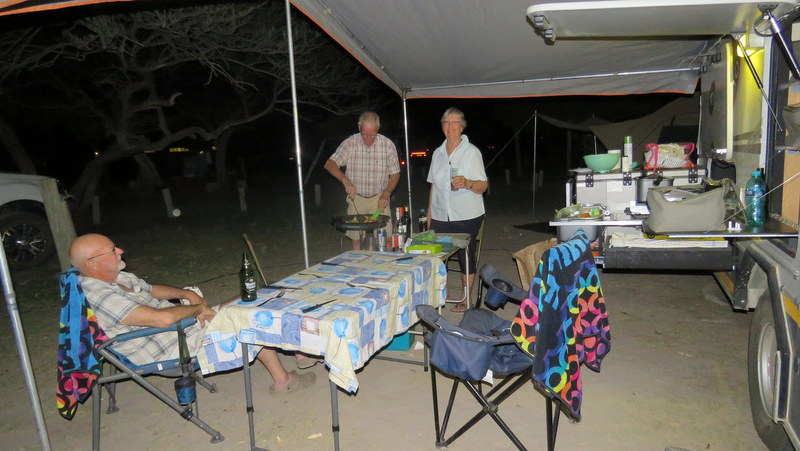 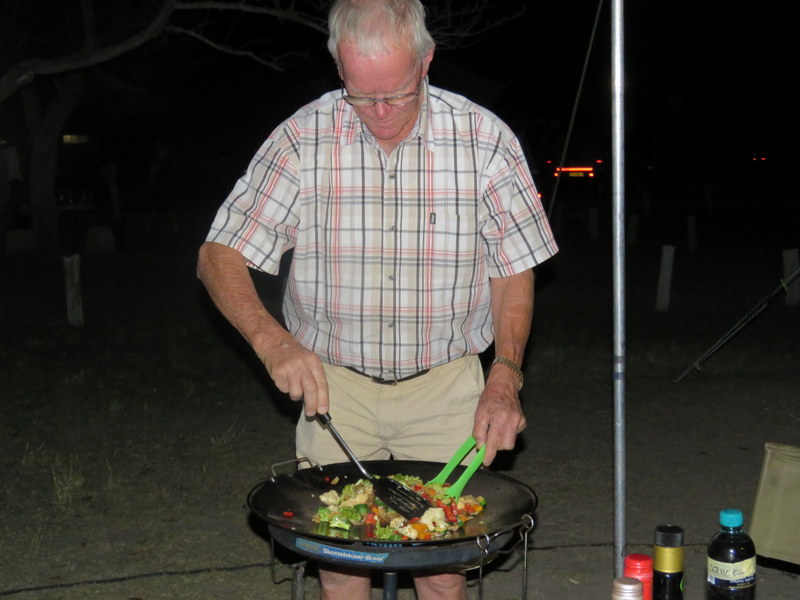